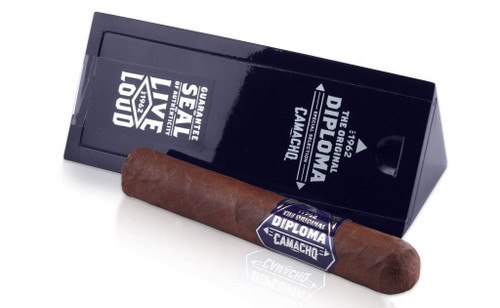 For the third time, there’s a new Camacho Diploma and this one is the most striking example to date.

The original Camacho Diploma debuted in 2001, the cigar was reblended and repackaged as part of the brand’s makeover in 2013, but discontinued in 2015.

This version is notably different. It’s a single-size, limited release with production being handled by the Honduran factory’s top five pairs, with leaves selected by the factory’s supervisor.

Blend-wise, it’s a Honduran corojo puro using higher priming leaves—those that are found on the top of the tobacco plant—a nod to the original blend and notably different from the three-country blend that debuted in 2013. It’s offered in a single 5 x 54 robusto extra size, limited to just 1,800 boxes of 18 cigars, though it’s planned as an annual release.