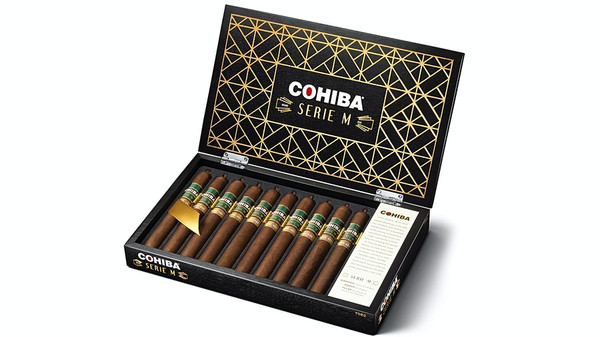 It measures 6 1/2 x 48 and like the original toro size, uses a Nicaraguan corojo wrapper over a Nicaraguan binder and filler tobaccos that include Dominican piloto cubano as well as Nicaraguan tobaccos from Estelí and Jalapa.  It will be limited to 5,000 boxes of 10 cigars.

“Since its debut a year ago, Cohiba Serie M has been a resounding success,” said Sean Williams, brand ambassador for Cohiba, in a press release. “We’ve received high praise from cigar media, shop owners and cigar lovers who have called Serie M one of the most exciting Cohiba blends they have ever smoked. Together with Sandy Cobas (owner of El Titán de Bronze) and her team, we’re proud to release the blend in a new size, giving cigar connoisseurs another opportunity to experience the artistry of Serie M.”

Join our newsletter
Thanks for signing up to our newsletter - we send occasional news, events, and other relevant information to keep you in the loop! Also check out our Cigar Text Club program where you can order cigars through text messaging! CigarTextClub.com